“it can be hard to see where scientific evidence ends and dogma and speculation begin.”

“Researchers, farmers, activists and GM seed companies all stridently promote their views, but the scientific data are often inconclusive or contradictory. Complicated truths have long been obscured by the fierce rhetoric.”

I agree wholeheartedly. Especially when browsing the internet, there is a lot of misinformation, half-truths, and outright lies about GM crops. I’m always glad to see this topic approached with scientific rigor, and I expected an outlet like Nature to do just that. The point of Ms. Gilbert’s article was to separate fact from fiction with respect to some often heard claims about genetically modified (GM) crops. One of the three issues Ms. Gilbert chose to tackle in her article is the claim that “GM crops have bred superweeds,” and she considers this statement “True.”

I was a little disappointed to see the term “superweeds” in any type of scientific publication. I have repeatedly expressed my displeasure with this term, and my graduate students know better than to ever use the word around me. To see it in a publication as reputable as Nature is exceptionally frustrating. But at least this article would be approached with some “scientific evidence” rather than “dogma and speculation”, right? But as I read through the section on superweeds, I saw very little that resembled scientific evidence; rather, lots of opinions, anecdotes, interesting tidbits, some facts and figures, and a fairly compelling narrative. But no “scientific evidence.”

The lack of any scientific evidence in the article probably relates to my biggest problem with the term superweed: nobody seems to know what a superweed is. To determine whether “GM crops have bred superweeds” at least two things are needed:

Let’s begin by trying to define superweed. Certainly, the term indicates that the weed is super in some way; it must possess some trait that is above and beyond an ordinary weed. Like a superhero that has some ability that the general public does not. So what is this “super” trait that superweeds possess? Can a superweed grow faster than the Incredible Hulk? Or can a superweed spin a web like the Amazing Spiderman? Or maybe a superweed can fly like Superman!

Most of the time, the term superweed is associated in some way with herbicide resistance. So if we define superweed as a weed that has evolved resistance to herbicides, we can then test the hypothesis that “GM crops have bred superweeds.” (ASIDE: The way this statement is phrased, there’s no way it can possibly be true, because crops don’t “breed” weeds. There are some rare cases where crops and weeds cross pollinate, but those have not resulted in any herbicide resistant weeds to date. For the sake of argument, we’ll assume Ms. Gilbert really meant “GM crops have significantly increased the development of superweeds.”) Dr. Ian Heap has developed and maintained a website to document new cases of herbicide resistant weeds, and we can use the data at that site to get an idea of whether this statement is true or false using our definition of superweed.

If GM crops have contributed significantly to the development of herbicide resistant weeds, we would expect the number of unique instances of these superweeds to increase following adoption of GM crops. The figure below illustrates all unique cases of herbicide resistant weeds between 1986 and 2012. I have fit a linear regression to the data from 1986 to 1996 (time period before widespread GM crop adoption) and another regression to the time period 1997 to 2012. 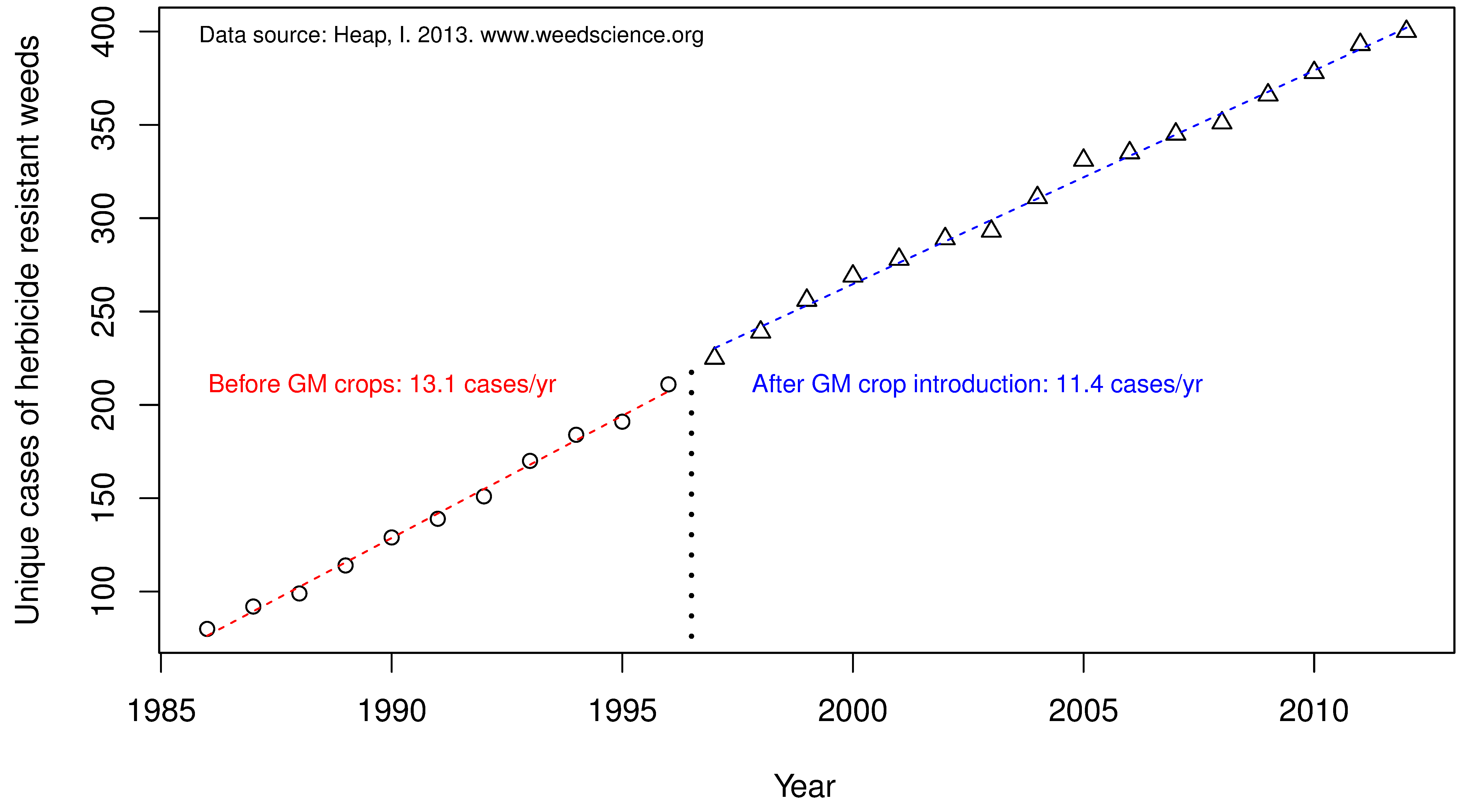 The slope of the linear regression is an estimate of the number of new herbicide resistant weeds documented each year. In the eleven year period before GM crops were widely grown, approximately 13 new cases of herbicide resistance were documented annually. After GM crop adoption began in earnest, the number of new herbicide resistant weeds DECREASED to 11.4 cases per year. The difference in slopes between these two time periods is probably not very meaningful from a practical standpoint. But based on the best data available, we can be quite certain that adoption of GM crops has NOT caused an increase in development of superweeds compared to other uses of herbicides. 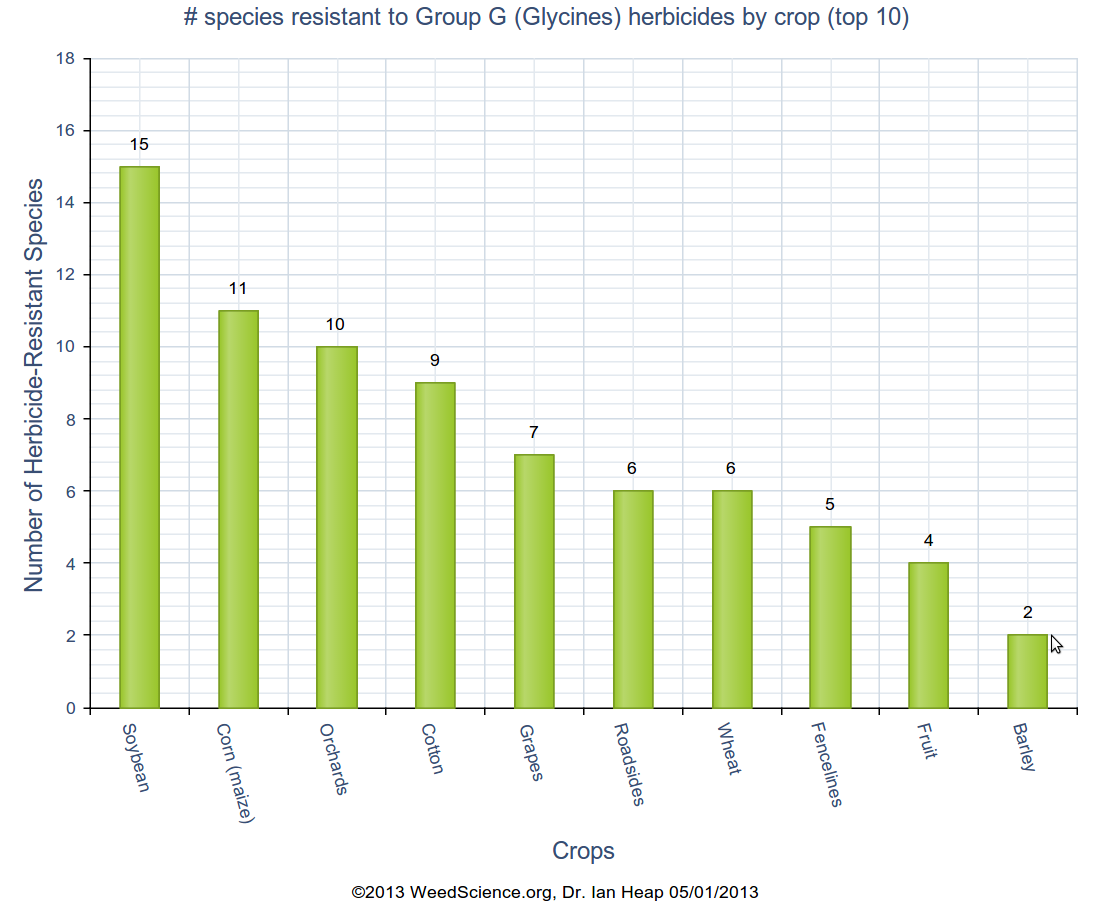 The only 3 GM crops on the chart are soybean, corn, and cotton. All of the other bars represent non-GM systems. If we add up the number of herbicide resistant species in GM crops and compare it to non-GM crops/sites, we should expect GM crops to have a higher number if GM crops are the primary contributor to evolution of superweeds. However:

So again, there appears to be no strong difference between GM crops and other sites where glyphosate is used. So this data again suggest that GM crops are not any more problematic than other uses of glyphosate for selection of superweeds.

Now, can we PLEASE stop using the term superweed?