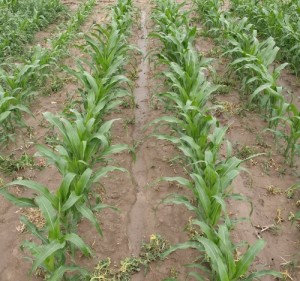 USDA-APHIS has just released the Draft Environmental Impact Statement (EIS) for 2,4-D resistant corn and soybean. The 2,4-D resistant crops were developed by Dow AgroSciences using genetic engineering. The corn and soybeans will be marketed to growers as the “Enlist” weed control system. Crops with the Enlist trait will not only be 2,4-D resistant, but will also have stacked traits that make the crops resistant to glyphosate and glufosinate. The ability to use three very effective herbicide modes of action will be helpful in managing herbicide-resistant weeds.

Three different transgenic events are included in this draft EIS.

You may have heard of these crops referred to by activists and activist journalists as “agent orange corn.” But I can assure you that when that term is used, the intent is not to inform, but to scare. In the FAQ that accompanied the Draft EIS, USDA-APHIS clarifies this point explicitly:

Q. Is 2,4-D the same thing as “Agent Orange” defoliant?
A. No. “Agent Orange” was a mixture of herbicides 2,4,5-T and 2,4-D, kerosene and diesel fuel. Agent Orange contained high levels of dioxin, a contaminant found in 2,4,5-T that causes cancer and other health concerns in people. EPA cancelled all use of 2,4,5-T in 1985 because of these risks. By contrast, EPA has approved the use of 2,4-D and considers it safe when used according to the EPA-approved labeling

The APHIS news release indicates that the Draft EIS will be available for public review and comment for 45 days from the date of publication in the Federal Register. I would encourage you to review the document and comment if you’re interested. But be warned; the draft EIS is 218 pages, plus 8 appendices of 196 more pages. The USDA has done a great deal of work in developing this document, very likely informed by their recent experience in deregulating glyphosate-resistant sugarbeet and alfalfa. Also from the news release (emphasis mine):

So unless public comments identify some negative aspects that are not already considered in the voluminous EIS document, it is likely that these traits will be deregulated in the relatively near future.

Post updated January 4, 2014 to include additional information on the three separate events covered in the draft EIS.