This has been a difficult year. One year ago, I learned that my best friend had died in a motorcycle accident. He was traveling to a meeting in California – a meeting that I was also attending. I found out about Gustavo’s passing just a few seconds before the flight attendant made me put my phone into airplane mode. I was alone, without the ability to communicate, and I’d just been told I would never again get to see the friend I was planning to see in just a few hours. A year after his death, I think of Gustavo a lot – countless times I’ve wanted to call to ask him about a plant identification, or how to plan an experiment. Or to tell him about what my dog just did (he loved my beagles). Or to tell him that my kid wanted him to come for a visit so he could see his red motorcycle.

A year later, I still miss him greatly. I wanted to do something to remember my friend – just something to keep his memory alive and with me. I could never put into words what Gustavo meant to me, or to the many other lives that he touched. But below is the eulogy I gave at Gustavo’s funeral service. It was the best I could do. 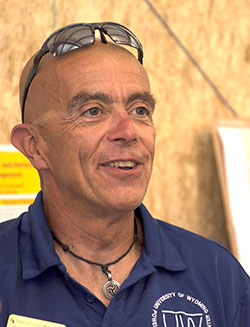 I met Gustavo 14 years ago when we were assigned to the same office as graduate students. One of the first things I learned about him was that he had LOTS of stories. I suspect there are men 100 years old that don’t have half as many stories (or as good of stories) as Gustavo. He regularly talked about his adventures (and some misadventures) when he was working on the blimp crews. Or when he drove a delivery truck in the financial district. And how he and others navigated the 1980s financial crisis in Argentina. One of my favorites was when he and a friend accidentally ended up with a job as translators for some wealthy foreign investors.

Gustavo also had a tremendous work ethic. He took pride that even in his 40s and 50s he could still keep up with (and often even stay ahead of) all of our graduate students that were half his age. He instilled in students the importance of working hard. In fact, when it came to student training there was really only 1 thing more important to Gustavo than a strong work ethic – and that was knowledge of music.

Few things disappointed Gustavo more than the inability of students (or anyone for that matter) to determine whether a Van Halen song was from the David Lee Roth or the Sammy Haggar era. And if you didn’t even know it was a Van Halen song? Well… good luck at your thesis defense.

Gustavo was a phenomenal teacher, in part, because he cared so deeply about his students. Students adored him. In fact, students loved him so much that they felt the need to say that on *my* teaching evaluations. When we co-taught the weed science lab many years ago, one of the comments I received from a student was simply “I preferred Gustavo.” It was hard not to be just a little bitter about that comment. But if I’m being honest, I have to admit: I also preferred Gustavo.

I can’t even count how many times Gustavo and I were out in the state, or even in other states, and a former student would yell across the restaurant or bar “GUSTAVO!” And Gustavo, without fail, would remember their name and offer to buy them a drink and catch up. In fact this happened again just last winter, and the student was one he had when we were grad students over a decade ago. Gustavo truly cared about his students.

Gustavo’s life ended much too soon. But in the relatively short time he was here, I can say confidently that Gustavo lived, and I mean truly lived, more than anyone I’ve ever met. This was obvious based purely on the number of stories he had, recounting the experiences of a life lived enthusiastically. But another reason I can say that with such confidence is that in the 14 years I knew him, according to my calculations, Gustavo only slept about 12 hours. Not 12 hours per night, but 12 hours TOTAL. Gustavo always had better things to do than sleep. Gustavo had experiences to live, and friends to see.

Gustavo would often stay at my house when he came to town. Every time, he would still be out catching up with family & friends when I went to bed, and he was almost always already awake, drinking his mate and chatting with my 4 year old at the breakfast table, by the time I woke up.

We’d often share a hotel room when we went to conferences, and it was the same thing. Out late spending time with old friends, up early in the morning making new ones. And it wasn’t that he didn’t enjoy sleep… Quite the contrary. Anyone who had the misfortune of trying to wake Gustavo up after a long night knows that the man liked to sleep. But Gustavo would happily give up 3 or 4 hours of rest if it meant he was able to spend even 1 more hour with his family and his friends. He preferred to spend his time truly living.

And that, I think, is what allowed Gustavo to touch so many lives, and the reason Gustavo was such a dear friend to so many. Gustavo always prioritized his family and friends above all else. He always had time for us.