As I was updating information on herbicide resistant weeds for class this week, I wanted to find some hard numbers on the large-scale impact herbicide-resistance can have. Obviously, my first thought was to find information on cotton production in the South. Glyphosate-resistant Palmer amaranth has been something of a poster child for the potentially devastating impacts of herbicide resistant weeds in the last few years. It has been dubbed a “superweed” by many, including Nature News, the New York Times, and various trade magazines. It has even been said to “threaten the sustainability of cotton production in the southeastern United States.” This herbicide-resistant weed has been so devastating that it has garnered national attention by people far removed from agriculture. Certainly, a problem of this magnitude must be causing damage that could be captured on a regional or even national scale.

The first case of Palmer amaranth resistant to glyphosate was documented in 2004 in Georgia, and it has since been documented throughout much of the South and several states in the Midwestern US. The most discussed impacts of this weed, though, have been in glyphosate-resistant cotton fields of the South. With this in mind, I decided to take a look through USDA-NASS cotton yield data to see how much cotton yield had decreased in the decade since glyphosate-resistant Palmer amaranth was first documented. My plan was to use the cotton yield data to illustrate to my weed science students how dramatic the impact of herbicide-resistant weeds could be.

From the beginning of the NASS data set to around 1938, there is a very slow increase in cotton yield. Beginning in around 1939, however, we started to see a dramatic improvement in cotton yield per acre. Mechanization of cotton harvest may have been a factor around this time. I am not a cotton expert, but I imagine the sustained increase in cotton yield between 1939 and today is due to a combination of factors, including mechanization, availability of synthetic fertilizers, insecticides, and herbicides, and genetic improvement in the form of new cotton varieties. Between 1939 and 2013, cotton yield in the US increased by an average of 7.9 lbs/acre/year. 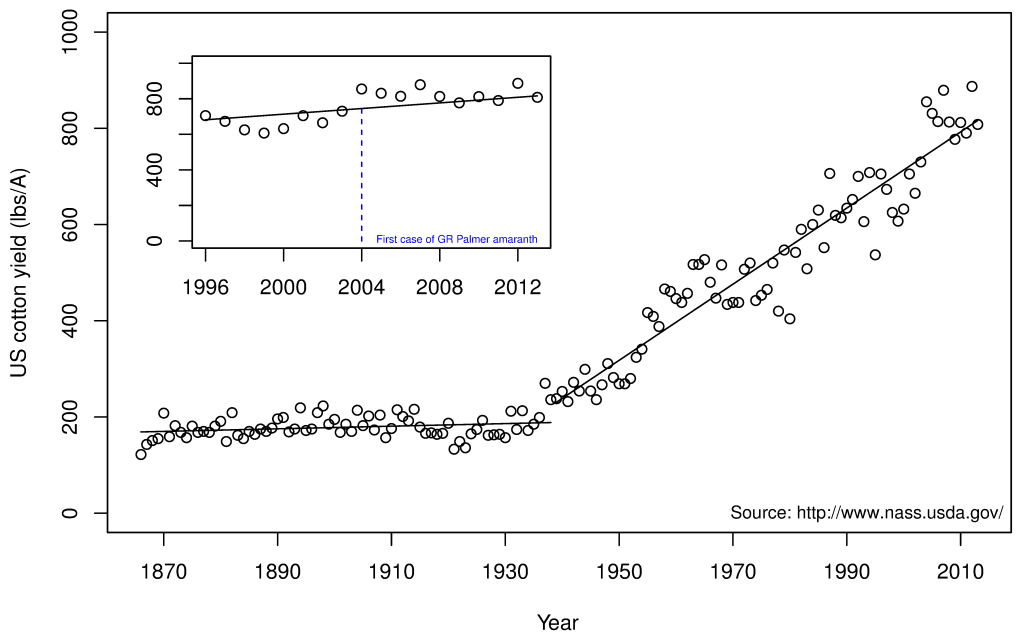 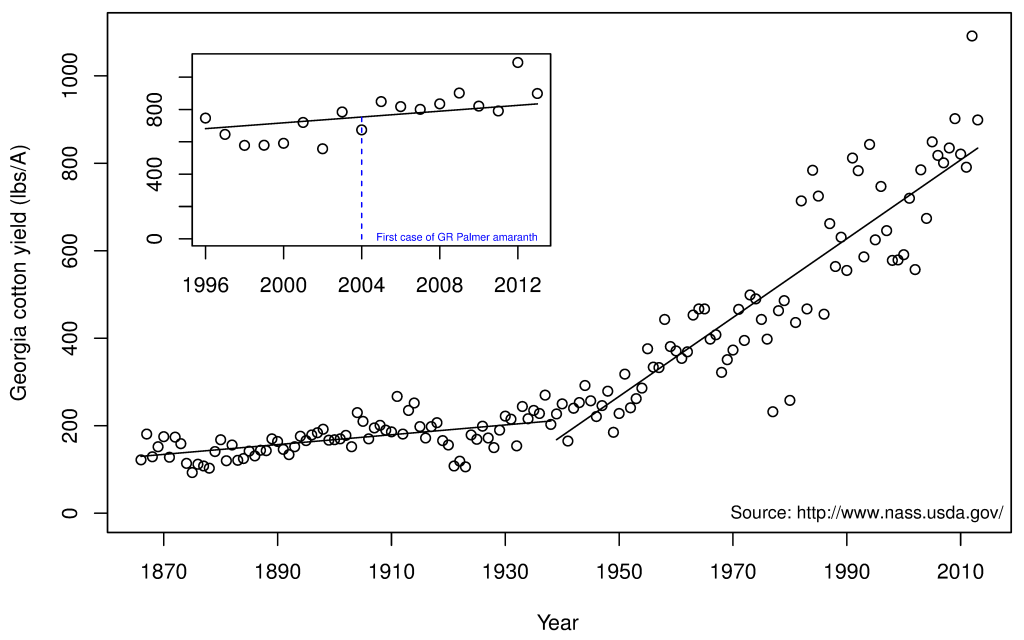 But cotton yields in Georgia looked very similar to the national data; since 2004, cotton yield was greater than the long-term trend 8 out of 10 years. Next I looked at North Carolina and Arkansas, simply because glyphosate resistant Palmer amaranth was discovered there soon after the discovery in Georgia. And again, cotton yields have mostly exceeded the long-term trend. Since the discovery of glyphosate-resistant Palmer amaranth, arguably the most damaging of all the so-called superweeds, cotton yield in the affected states continues to increase. 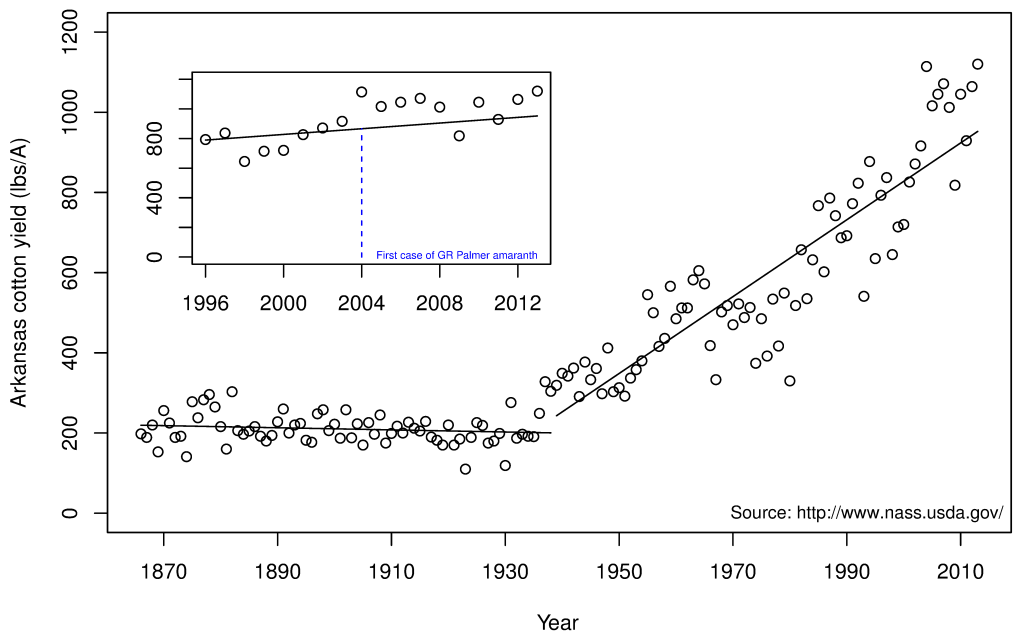 To be clear, though, I don’t want anyone to get the impression that glyphosate-resistant Palmer amaranth hasn’t had a major impact. On the contrary, there is ample evidence that farmers in the South have had to adapt to this particular problem by using other herbicides, re-introducing tillage, or using cover crops. These additional weed control practices cost money, and growers with glyphosate-resistant weeds may very well have seen a reduction in their net economic return. There are surely many examples of individual cotton fields where yield was significantly reduced by this weed. But I think it is important to note that these herbicide-resistant weeds have not had the devastating impact on crop yields, at least not on a macro-scale, that is often implied by the sensational coverage of this topic.

My reason for presenting this data (in addition to it being a little surprising) is not to trivialize the additional management effort required to control herbicide-resistant weeds; quite the opposite. I think the fact that we’ve not observed yield reduction on a large scale, although surprising at first, is a testament to the resilience and skill of the American farmer. Not too long ago, I was asked by a fairly prominent journalist whether there has “been a general de-skilling of farmers” as they adopted herbicide-resistant crops. My response:

I have no doubt that even after weeds evolve resistance to many different herbicides, farmers will still find ways to manage them. It might be less simple than it was a couple years ago. But I don’t think they’ve lost the skills necessary to do it.

I think the cotton yield data are strong evidence that I was right. In the battle between farmers and superweeds, I’m putting my money on the farmers. In the face of herbicide-resistant weeds that “threaten to overgrow U.S. fields,” the cotton farmers in the South did nothing more than increase yield. And that is a compelling narrative that has some data to support it.