Last August, an article was published in New Phytologist that claimed a transgene added to rice could increase the fitness of a weedy relative. The paper was covered in the media pretty widely. When I read the paper, I didn’t think the authors presented nearly enough data to support their conclusions. You can find my criticisms in detail here.

I think it is worth revisiting this paper now for a couple of reasons. The first is that two formal criticisms of the original paper (as well as author responses) have now been published by New Phytologist. The first letter was written by a group of prominent scientists led by weed scientist Jonathan Gressel. Gressel et al. point out several deficiencies in the original report, but the most important is that Wang et al. did not provide enough information in their article for independent scientists to replicate the study.

“A basic tenet of published science is that other scientists should be able to reproduce the experimental findings, based on the Materials and Methods section of peer-reviewed papers. This was not the case here.”

“…the paucity of molecular data renders the experiments impossible to reproduce. This lack of critical information means that there is little opportunity for independent validation of the presented results and no possibility for follow-up directly addressing the significant issues discussed regarding transgene movement in the future. This is especially important given that the media immediately interpreted and summarized the results making strong assertions. Clearly this was either based only on the misleading title and overstated summary, and/or on a press release by an author (http://researchnews.osu.edu/archive/geneflow.htm).”

Gressel et al. also make good observations on the deficiencies in the way the competition studies were conducted, and would be good reading for anyone doing this type of work in the future. Finally, Gressel et al. take issue with the media’s “non-critical acceptance of [the authors’] conclusions in the paper, even in Nature News (Qiu, 2013) and reproduced verbatim in Scientific American.”

The second letter criticizing the Wang paper was written by scientists from the Flanders Institute for Biotechnology in Belgium. Grunewald & Bury point out several of the same deficiencies I wrote about earlier. In particular, they mention the differences between the transgenic line and the parental line as well as the unaccounted possibility of transgene location effects. In fact, the observations by Grunewald & Bury are so similar to mine, it really is amazing the original peer reviewers did not find the same problems. The authors of the original paper have responded to the criticisms here and here. If you are interested in this topic, I think reading the criticisms and the author responses are worthwhile. I personally don’t think the author responses clarified many of my original critiques, even though they were shared by the letters.

The second (and more interesting) reason I think now is a good time to revisit this topic is that some new data has just been published that addresses the hypothesis proposed by Wang et al. To briefly review, I think the following three quotations from the Wang et al. co-authors summarize their proposed hypothesis and conclusions:

So basically, the authors believe that the effects are, in fact, due to over-expression of the EPSPS gene (even though I don’t think their data are anywhere near conclusive). If their hypothesis is true, though, this effect should be observed in other plants where EPSPS is being over-expressed. Conversely, if over-expression of EPSPS in other plants didn’t have similar effects, it seems that there is probably some other explanation (like closely linked genes).

Palmer amaranth, a very problematic weed in the US, has evolved resistance to glyphosate by increasing the number of EPSPS genes it has. Remarkably, Gaines et al. showed glyphosate-resistant Palmer amaranth increased EPSPS expression by up to 35-fold compared to susceptible biotypes. If over-expression of EPSPS leads to quantifiable benefits to fitness-related plant growth parameters, as Wang et al. proposed, glyphosate-resistant Palmer amaranth should be a perfect test organism. Wang et al. claim that the rice hybrids they tested exhibited a 2-fold increase in EPSPS expression compared to susceptible hybrids, and that was enough to cause the effects they observed. If a 2-fold increase in EPSPS was enough to increase fitness in rice, surely a 35-fold increase would have dramatic effects in Palmer amaranth.

A new study in the journal Weed Science by Giacomini et al. has tested this very hypothesis. They used Palmer amaranth with a wide variety of EPSPS gene copy numbers and measured a variety of responses that might relate to plant fitness (such as photosynthetic rate, transpiration rate, early growth rate, plant biomass production, seed production, etc.). Giacomini were kind enough to summarize the impact of EPSPS on all of these fitness-related parameters in a single table: 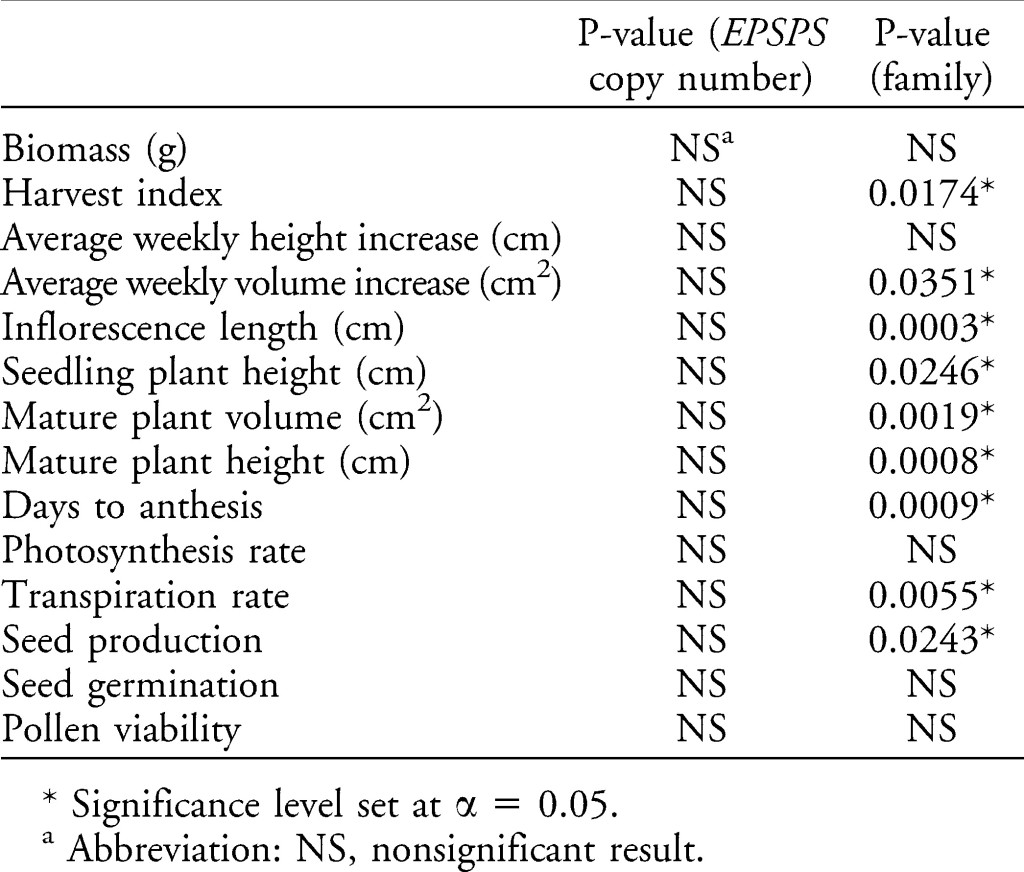 Notice the column of P-values for EPSPS copy number; ALL of them are nonsignificant. This suggests that there is very little evidence that even high levels of EPSPS expression had an effect on growth of the plant. It seems unlikely that a 2-fold increase in EPSPS would cause dramatic effect in rice, while an 80-fold increase in EPSPS gene copy number would have no impact on similar responses in Palmer amaranth. This suggests that the results in the Wang et al. rice paper are very likely the result of something other than EPSPS expression, as I and others have suggested.

Also relevant to the weedy rice paper, Giacomini et al. looked at one more very important factor. The last column in the table above presents the effect of “family.” The “family” effect controls for the genetic background of each of the plants used in the study. Many of the fitness-related measurements were significantly affected by the parental background. Certainly, we know that there are many heritable traits that can increase plant fitness, so why is it so important that Giacomini controlled for this factor? Take a look at this figure:

When the genetic background of the plants is not controlled for, it is possible to see a (false) relationship between EPSPS copy number and six of the fitness-related measurements. In the authors’ words:

“Plant growth-related variables (harvest index, height, and volume) showed a positive correlation with EPSPS copy number, suggesting a fitness benefit for resistant individuals. The fecundity-related measures of inflorescence length and days to first flower, on the other hand, suggested fitness costs for the resistant plants as a result of later flowering and shorter inflorescences.”

But when the genetic backgrounds were accounted for, these differences disappeared. Again, in the authors’ words:

“That is, any relationships revealed in the initial regressions on pooled individuals from all families were not due to fitness effects associated with EPSPS copy number, but to among-family differences in segregation at other fitness-related loci.”

This is a great example of why it is so important to use multiple genetic backgrounds if you want to isolate the impacts of a particular gene. And this is exactly what Wang et al. failed to do in their study on transgenic weedy rice hybrids. So while the Giacomini et al. paper studies a different weed species and a different mechanism of EPSPS over-expression, I think the results provide quite a lot of evidence contrary to the relatively weak hypothesis proposed by Wang et al.