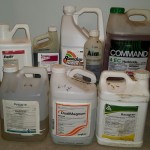 There are two things that I think just about every weed scientist can agree on:

How diverse are US herbicide programs?

Herbicide site of action diversity in cotton showed a similar trend as soybean, although the reduction in conjunction with glyphosate resistant crops was not as drastic. Of note is the significant reduction in Group 17 herbicides, which are the organic arsenical herbicides MSMA and DSMA.  [UPDATE: MSMA still has an active registration.] It is difficult to argue that reduction in these herbicides was a bad thing. Because, you know, arsenic.

Glyphosate resistant corn was introduced around the same time as soybean and cotton. However, the adoption rate of glyphosate resistant corn varieties was much slower than those other crops, in part, because of the many effective herbicides available for use in corn. The net effect of adding glyphosate to a crop with many existing effective herbicides was an increase in herbicide site of action diversity. Introduction of the Group 27 herbicides (HPPD – pigment inhibitors) during the same time period also contributed to the increase in diversity. This reduced a rather heavy reliance on Group 5 herbicides (such as atrazine) and Group 15 herbicides, thereby increasing overall herbicide site of action diversity in corn.

Rice acres were only surveyed six times over the last 25 years. A linear regression was used for rice SOA diversity since loess would have ‘overfit’ the data with this few data points. The surveys were conducted near the beginning and end of the period, though, so we can still be reasonably confident in the overall trend in herbicide diversity. In the early 1990’s, only two herbicide groups (Group 8 and Group 7) made up around 75% of all herbicide applications in rice. Group 2 herbicides increased steadily over the last 25 years, at least in part, due to adoption of Clearfield varieties, which were bred to be resistant to the imidazolinone (Group 2) herbicides. The increase in Group 2 herbicides in rice is similar to the increase in Group 9 herbicide (glyphosate) in corn.

Herbicide diversity has steadily increased in spring wheat. In the early 1990’s nearly 75% of herbicides applied were Group 4, which includes the synthetic auxin herbicides 2,4-D, MCPA, and dicamba. Over time, reliance on that group of herbicides has declined, being largely replaced by Group 6 and Group 9 herbicides. Glyphosate is the only Group 9 herbicide, and its use has increased steadily over the last 25 years, even though no glyphosate-resistant spring wheat varieties are grown commercially. Since glyphosate cannot be used in the growing wheat crop, the Group 9 herbicide use shown in the figure must be applied before wheat planting. The same trend in glyphosate use has been observed in winter wheat.

Another way to quantify diversity is to look at ‘evenness’ of the herbicide use. Shannon’s equitibility (abbreviated E) is a measure that estimates evenness. Shannon’s equitibility also has a reasonably intuitive interpretation; if all herbicide sites of action were used on exactly the same number of acres, E would approach the value of 1.0. If a single herbicide makes up a vast majority of the herbicide applications, E will be much lower. To compare crops with respect to herbicide site of action diversity, I’ve placed the diversity indices and evenness estimates over time on the same plot. In 1990, soybean had the most diverse herbicide program by either statistic, but dropped to be the least diverse herbicide program by 2006. Rice and corn both started out in the middle of the pack with respect to site of action diversity, but then increased to become among the most diverse. Increases in both of these crops is at least in part due to herbicide-resistant varieties (Roundup Ready for corn, Clearfield for rice). Cotton, another herbicide-resistant crop, had an intermediate response. 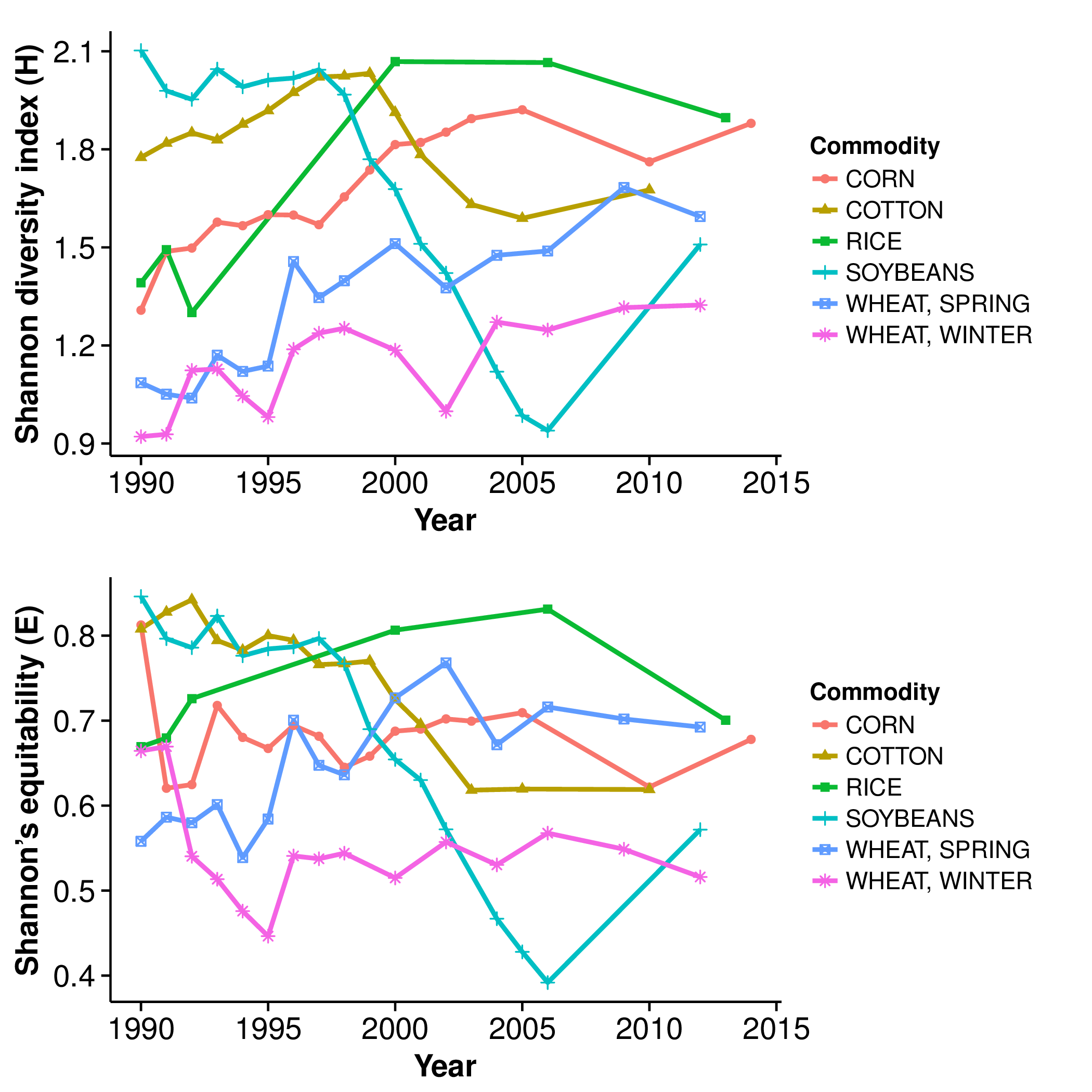 What does it all mean?

Even with these caveats, the diversity data suggests that herbicide resistance traits (either through biotechnology or conventional breeding methods) can either increase or decrease herbicide diversity depending on how they are used. These data don’t support the claim that herbicide resistant crops, as a whole, have made the weed resistance problem worse (or better). The cases of glyphosate resistant soybean and corn are interesting examples in this regard. Soybean had the most diversity in herbicide sites of action in 1990, while corn had among the lowest. The introduction of Roundup Ready varieties caused herbicide diversity to drop drastically in soybean, but steadily increased herbicide diversity in corn. The rate of resistant weed development over the same time period has been significantly greater in soybean compared to corn (see figure below). Causality cannot be established here, but this is the trend we would expect based on the herbicide diversity observed in these two crops. Glyphosate seemed to supplement alternative herbicides in corn rather than replace them, as occurred in soybean. Presumably, those alternative soybean herbicides were still available, but they were not being used. 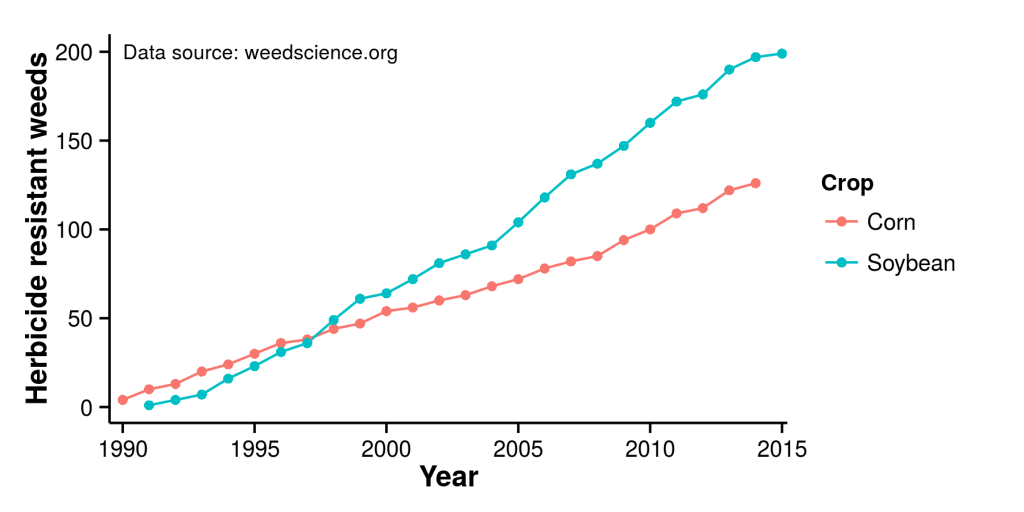