This is a follow-up to my last post on the recent New York Times article written by Danny Hakim. A small but very important section of the NYT article has been bothering me ever since I read it, but it took me a while to find the time to actually find the data to explain why it bothered me. In my last post, I mostly looked at herbicide use; I’m a weed scientist so I already had that data downloaded and analyzed. But this section related specifically to insecticide use, which required me to go to USDA and download then analyze the insecticide use data. Here is what Mr. Hakim wrote in the NYT article:

Fears about the harmful effects of eating G.M. foods have proved to be largely without scientific basis. The potential harm from pesticides, however, has drawn researchers’ attention. Pesticides are toxic by design — weaponized versions, like sarin, were developed in Nazi Germany — and have been linked to developmental delays and cancer.

“These chemicals are largely unknown,” said David Bellinger, a professor at the Harvard University School of Public Health, whose research has attributed the loss of nearly 17 million I.Q. points among American children 5 years old and under to one class of insecticides. “We do natural experiments on a population,” he said, referring to exposure to chemicals in agriculture, “and wait until it shows up as bad.”

The industry is winning on both ends — because the same companies make and sell both the genetically modified plants and the poisons. Driven by these sales, the combined market capitalizations of Monsanto, the largest seed company, and Syngenta, the Swiss pesticide giant, have grown more than sixfold in the last decade and a half. The two companies are separately involved in merger agreements that would lift their new combined values to more than $100 billion each.

This excerpt appears crafted to suggest that planting GMO crops has 1) lead to increased reliance on pesticides similar to those used by the Nazi’s, 2) those pesticides have caused a remarkable drop in our children’s intelligence, and 3) that giant corporations have made billions from poisoning our children. 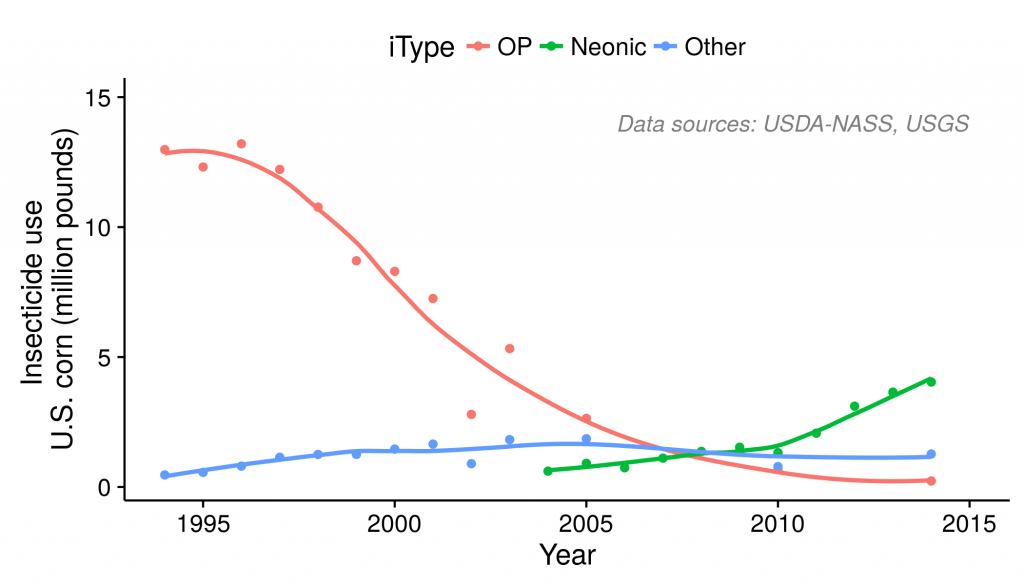 One caveat: it isn’t entirely clear that GMO crops are responsible for all (or even most) of this decrease in organophosphate use. Newer, safer types of insecticides have likely replaced at least some organophosphate use. But there is strong evidence that nearly all types of insecticides have decreased as Bt crops have been adopted, in every country where GMOs have been allowed to be planted. In fact, this was perhaps the only point on which the recent National Academies report on GMO crops did not waver at all:

Not only did Bt crops reduce insecticide use by the farmers who’ve adopted the technology, but they have in some cases created a ‘halo’ effect that has reduced spraying by non-adopters as well. Bt corn was so effective for European corn borer (ECB) control in the US, the population of this once-common pest has decreased to the point that non-GMO corn growers no longer have to use insecticides either. That’s a pretty remarkable success when it comes to reducing pesticide use, if you ask me.

Contrary to my post title, I’m not going to try and claim that adoption of GMO crops has increased childrens’ IQ. But I find Mr. Hakim’s implication that the opposite has occurred to be completely without merit.