Herbicide use patterns in the US have changed a lot over the last 25 years. Depending on who you talk to, those changes are either proof that modern American agriculture will feed the world with fewer inputs, or proof that the US agricultural system is irreparably broken. There seems to be no middle ground in this discussion.

Herbicide use is especially controversial when discussed in the context of genetically engineered crops (often called GMOs, for genetically modified organisms). The most widely adopted GMO trait worldwide allows crops to be sprayed with the herbicide glyphosate (most commonly known as Monsanto’s Roundup, but now sold under a variety of names by several different companies). Critics of GMOs often blame these glyphosate-resistant crops for increasing the use of herbicides; while proponents of GMOs say these varieties have allowed the use of less toxic herbicides. To date, however, there hasn’t been very strong evidence to support either of those assertions.

There have been a few studies in the recent literature that have attempted to describe the changes in herbicide use in relation to GMO crops. But with few exceptions, those studies have relied on weak methods of measurement. In particular, they have reported the total weight of herbicide being applied, or “pounds on the ground” as some like to say. But simply adding up the weight of herbicide applied misses the point.

Herbicides vary widely in their toxicity, both to plants and other organisms including humans. So combining them all together and reporting a single number of pounds applied isn’t very meaningful. It would be akin to a doctor prescribing the same dose of medicine, regardless of the potency of the drug. It would be ridiculous to prescribe the same amount of Tylenol and morphine just because they’re both pain killers. A 500 mg dose of these two drugs would lead to very different outcomes. The same is true with herbicides. One pound of imazethapyr would have a dramatically different impact compared to one pound of acetochlor.

There are many potential aspects of herbicides that are of interest; impacts on human health, impacts on wildlife such as bees and fish, impacts on soil health, etc. A few previous authors have compared herbicides using an index called the environmental impact quotient (EIQ) that incorporates a lot of established toxicity data. However, multiple authors over the last 20 years have found the EIQ has very little relation to actual risks associated with herbicides. Because of the way the EIQ is constructed, it is nearly meaningless for predicting actual risks to health or the environment.

I have a new paper out today, published in the journal Nature Communications, titled “Long-term trends in the intensity and relative toxicity of herbicide use.” In this paper, I investigated changes in the mammalian toxicity of herbicides over time, since mammalian toxicity is among the best estimates we have for the risks faced by pesticide applicators. Risks to consumers would theoretically follow similar trends, but since pesticide applicators are exposed to much greater doses (and exposed far more often) the results of this analysis will be most applicable to that group. The overall goal of this analysis was to evaluate how mammalian toxicity of herbicides in the US has changed over the last 25 years, especially in the wake of widespread adoption of genetically engineered crops (often called GMOs).

Part of my motivation for undertaking this project was simply to look at the evidence in an attempt to answer the question: “Did adoption of GMO varieties have a positive or negative effect on herbicide use?” Admittedly, the publicly available data I used weren’t suited to answering this question exactly; but the overall trends, I think, still provide sound evidence on which to base some conclusions. 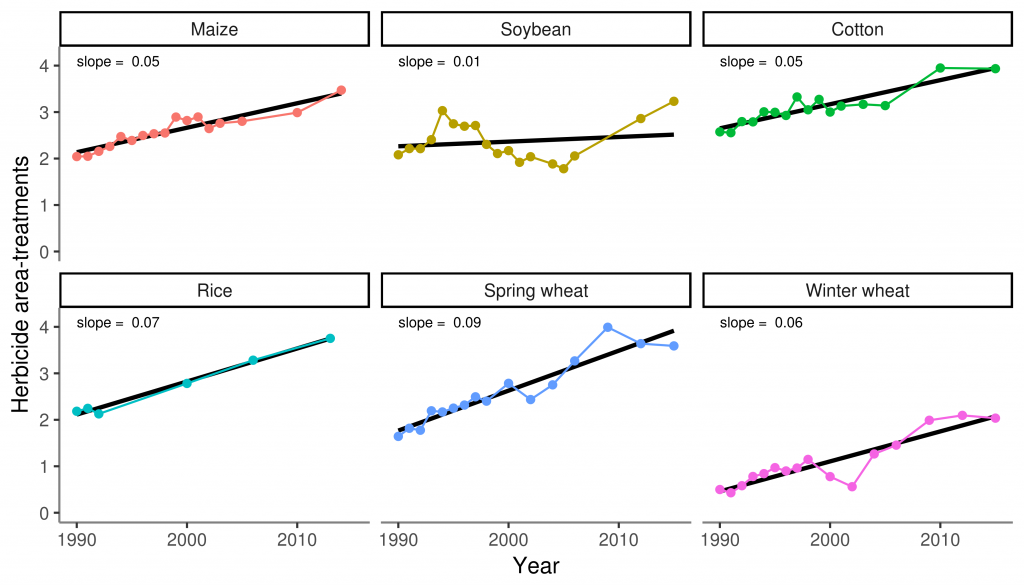 Another interesting finding from this analysis is that the trends in relative herbicide toxicity are different depending on whether you look at acute or chronic toxicity. Acute toxicity is what most people think of when they hear the word “toxic.” Acute toxicity describes how much of a chemical would be required to cause problems in a one-time exposure. Think spilling onto your clothes, or accidentally drinking the herbicide. But for pesticide applicators, the chronic toxicity of a herbicide is arguably more relevant, since they’re interacting with these chemicals on a regular basis for many years of their lives. It is rare for an applicator to accidentally ingest an acutely toxic dose; but much lower doses are required to cause chronic effects, as long as the exposure is repeated enough times. As a pesticide applicator myself, I was particularly interested in the chronic toxicity hazard results.

Another interesting finding in this paper is that most of the major reductions in toxicity hazard were unrelated to the adoption of GMO crops. Where toxicity was reduced, it was mostly due to EPA removing the most toxic herbicides from commercial use. In particular, registration cancellations for cyanazine, alachlor, and molinate had major impacts on the toxicity hazard quotients in the analysis (see the supplementary information file for details).

I’ve written before that if we stopped using glyphosate, some other weed control tool would necessarily take its place. And those other tools would have risks (and benefits). Agricultural decisions have real-world implications. This analysis also suggests that if glyphosate were no longer used in these GMO crops, there would likely be a substantial increase in the chronic toxicity hazard associated with herbicide use, since it would almost certainly be replaced with more toxic herbicides. Unfortunately it is very difficult to say how great that impact would be. In my opinion, we need to figure out ways to become less reliant on herbicides for weed control; the overall increase in herbicide intensity in all crops in this analysis is concerning. It is possible that continued reliance on GMO crops and herbicides has even slowed development of other potential solutions (like robotics, cultural practices like crop rotations, etc.).

In summary, this analysis suggests that GMOs have had a positive effect (or at the very least neutral or non-negative effect) with respect to herbicide use intensity and mammalian toxicity, and I’m sure that will disappoint many folks who don’t like GMOs. But it also shows the benefit of GMOs in reducing herbicide intensity and toxicity doesn’t appear quite as dramatic as many GMO proponents would like to believe.

Kniss AR (2017) Long-term trends in the intensity and relative toxicity of herbicide use. Nature Communications. doi:10.1038/ncomms14865.