Yesterday, I posted some photos to twitter, and have been asked to provide a little bit of context. My goal with these photos was not to “raise an alarm” – I was simply trying to provide a visual illustration of how susceptible soybean plants are to the herbicide dicamba. Recently, I published a meta-analysis of published literature on this topic. In that paper, I estimated the amount of dicamba required to cause both yield loss and visible injury symptoms. The figure below is from that publication, showing the estimated dicamba rate required to cause visible soybean injury: 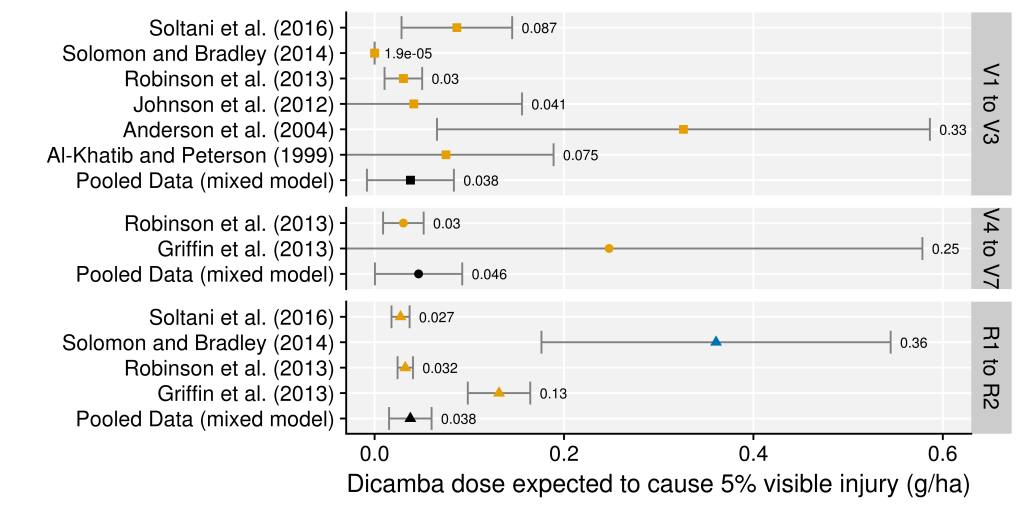 This figure shows that 5% visible injury will occur if soybeans are exposed to at least 0.038 grams of dicamba per hectare. But most people (including me!) don’t think in terms of grams per hectare, or even the US version of this rate (pounds per acre). So I wanted to create an image that provides those values in a way that could be understood. This number (0.038 g/ha) is so low it is very difficult to visualize. What does 0.038 grams of dicamba look like?

So I did the calculations to figure out what the values in my recent manuscript would actually look like if we measured out those amounts in formulated herbicide product. The value from my analysis (0.038 grams/hectare) is equal to 0.000034 pounds per acre. And to get 0.000034 pounds, one would need to apply 0.044 milliliters of the formulated product Xtendimax. Here’s what 0.044 milliliters of a liquid looks like:

I used red food coloring because it is difficult to see water, and that’s what I had available in my lab – the similarity to the color of blood is purely coincidental. If you were to spread this amount of Xtendimax over a soybean field the size of a football field (1 acre), then you would be able to see minor symptoms throughout the entire area. But this amount would be very unlikely to cause yield loss in the soybeans. For that, one would need more dicamba.

At flowering, which is thought to be the most susceptible stage of soybean growth, my meta-analysis showed that it would require 0.9 grams per hectare (0.0008 lbs/A) of dicamba. To get 0.0008 lbs of dicamba, it would require approximately 1 milliliter of Xtendimax. And here’s what a 1 mL droplet of liquid looks like:

Xtendimax is only 1 of the dicamba formulations that can be sprayed onto dicamba-resistant soybeans, and it contains 2.9 pounds of dicamba acid per gallon of product. The other major formulation, Engenia, is even more concentrated – Engenia contains 5 pounds of dicamba acid per gallon. So the amount of Engenia required to cause injury or yield loss to conventional soybeans would be even less than what these photos show.